Rokas is delighted to announce that on Tuesday, March 5, 2019, a one-day conference titled “20 years since Law 2735/1999 on international commercial arbitration: Present and Future of the Greek Arbitration Law” took place at the Electra Metropolis Hotel in Athens. Ιt was attended by a full-house, among others distinguished specialists of the law, practicing lawyers as well as academics.

The conference was organized by the ICC – The International Chamber of Commerce Greece, in cooperation with Rokas Law Firm, under the auspices of the Athens Bar Association and the Hellenic Federation of Enterprises, with the participation of leading lawyers, specialising in international arbitration. Indicatively, we are mentioning a few names such as Georgios Petrochilos, Partner at Three Crowns, LLP, Athena Papafeastratiou-Fouchard, Counsel, International Arbitration and Public International Law, Eversheds Sutherland, Katia Giannaka-Small, Counsel in International Law, Arbitrator, Lecturer of Law School Gould, University of Southern California.

We were proud to have received the warmest congratulations from the Chairman of the ICC Greece Petros Doukas and from major stakeholders in the local market, for our contribution to the excellent organization of the event.

This is a matter of general interest, as it does not only concern the dispute resolution mechanism of large economic value projects, but also involves accelerating justice in Greece by channelling a considerable number of disputes, even of lesser economic value, from the Greek courts to arbitration.

At the end of the conference a round-table discussion took place moderated by the former Prime-minister and President h.c. of the Administrative Supreme Court Mr. Panagiotis Pikrammenos. During this discussion, the need for proper implementation of the provisions of the Greek Law 2735/1999 by the Greek courts was notably stressed, taking also into account the need to follow its uniform interpretation, as formulated by the decisions of the national Courts of dozens of countries that have adopted the UNCITRAL Model Law. 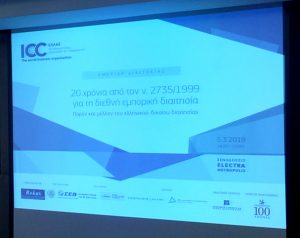 “Credibility paves the way for the establishment of insurance awareness” an interview of Prof Ioannis Rokas, Senior Partner of Rokas Law firm by Insurance World magazine

Season’s Greetings from all of us at Rokas Law Firm Greece and our offices across Central and SE European countries.

“Credibility paves the way for the establishment of insurance awareness” an interview of Prof Ioannis Rokas, Senior Partner of Rokas Law firm by Insurance World magazine
January 16, 2023Admin
Season’s Greetings from all of us at Rokas Law Firm Greece and our offices across Central and SE European countries.
December 20, 2022Admin
Greece introduces emergency intervention measures in electricity supply sector to combat energy crisis
December 20, 2022Admin
We use cookies on our website to give you the most relevant experience by remembering your preferences and repeat visits. By clicking “Accept”, you consent to the use of ALL the cookies.
Cookie settingsACCEPTRead More
Manage consent